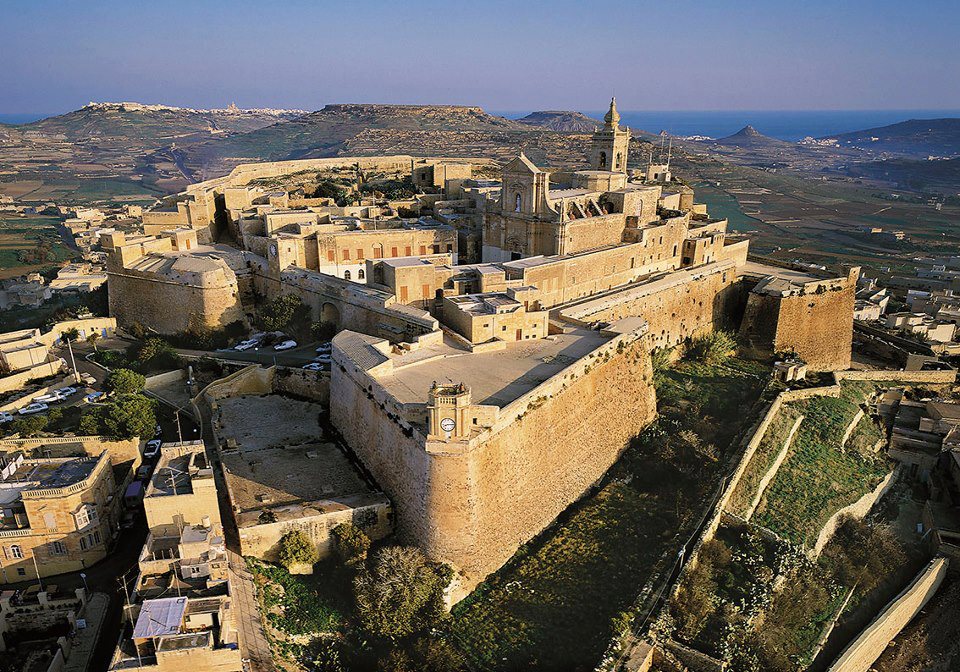 With its distinctive skyline and imposing military architecture, Cittadella, the ancient fortified city, stands out as Gozo’s major landmark, a beacon visible from all over the island.

All roads in Gozo lead to Rabat, also known as Victoria. The Citadel is visible from almost all the Island, rising steeply above the surrounding countryside.

With its distinctive skyline and imposing military architecture, Cittadella, the ancient fortified city, stands out as Gozo’s major landmark, a beacon visible from all over the island.

The Citadel in Gozo owes its roots to the late medieval era, but the hill has been settled since Neolithic times. For centuries, the Citadel served as a sanctuary from attack by Barbary corsairs and Saracens. This small island was susceptible to frequent pirate raids and attacks. In 1551, Ottoman forces overtook vulnerable Gozo and captured around 600 people, leaving behind only the old and sick. The captive Gozitans were taken to Tripoli where they were sold into slavery. It was clear that something had to be done to protect Gozo’s people.

After the Great Siege of 1565, the Knights set about re-fortifying the Citadel to provide refuge and defence against further attack. Until 1637, the Gozitan population was required by law to spend their nights within the Citadel for their own safety. In later, more peaceful times, this restriction was lifted and people settled below its walls, creating the prosperous town of Rabat, now known as Victoria.

Only a couple of families live within the Citadel walls today. In the square you will find the magnificent baroque Cathedral of Gozo dedicated to Santa Marija, or more precisely the Assumption of the Virgin Mary; as well as the Law Courts and the Bishop’s Palace.

Victoria is not just the geographic heart of Gozo, it is also the centre of everyday activity. It manages to combine the bustle of its market and shops with a relaxed and sociable atmosphere. It is a great place to watch the Islanders go about their day, especially when the main market square, It-Tokk, comes to life.

Very close by are several fascinating small museums and a state of the art Visitors’ Centre (access FAQs here): The Cathedral Museum, the Museum of Archaeology, the Folklore Museum, the Gozo Nature Museum, the Old Prison, the Old Gunpowder Magazine, the Grain Silos, the Battery and the World War II Shelter.

St. George’s Basilica, Gozo. Browse around Victoria’s market and narrow winding streets and you’ll find everything from delicious fresh produce, cheeses and wines, to antiques, craft goods, fishing nets and knitwear. The town also has a thriving cultural life all its own, with some surprising attractions ranging from opera to horse races in the main street on festa day.

The Citadel continues to be one of the most frequented tourist attractions of the island. Visitors can walk along the bastions and take in stunning 360° views of the surrounding villages, farms and countryside.

The Cittadella is a fortified city built on top of a hill and therefore it was intended to be an inaccessible place. The Cittadella Restoration Project has addressed this problem and has increased accessibility within the physical constraints of the site. A number of lifts have been installed around the site which provide access to most parts of Cittadella including the Visitors’ Centre, Ditch and main entrance area. Other ‘assisted lifts’ are also available for wheelchair users between 9.00am and 5.00pm. Stairs and steps have been removed from most passage ways within Cittadella, however, given the physical conditions of the site, most have a steep gradient and wheel chair users will need assistance to roam around.