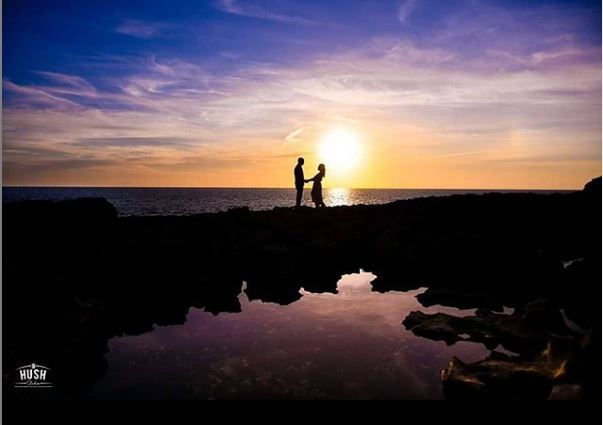 Why Gozo is the perfect place to propose?

With its rugged, romantic coastline, ancient mysterious landmarks, passionate people and selfie-worthy scenery Gozo provides the perfect backdrop for romantic breaks. Situated in the heart of the Mediterranean, the island is an ideal destination for an idyllic, romantic holiday for two. The hospitality of Gozitan people and the serenity of scenery here, enchants visitors and the laid back pace of life will enrich your relationship, giving you the time and space to fall more in love with each other.

Plus, with coastal landmarks like Dwejra Tower, Xlendi Tower and Calypso’s Cave – with the latter linked to legends of love (said to be where the nymph Calypso kept Odysseus a ‘prisoner of love’ for seven years in Homer’s book The Odyssey); the island’s setting is just amazing and you’ll understand why Gozo has the power to captivate visitors.

If romance is on your mind, read on because this week’s VisitGozo blog explains ‘Why Gozo is the perfect place to propose’.

Towering high into the sky in central Victoria is one of Gozo’s most imposing and culturally significant landmarks, The Cittadella – a 3000 year old ancient fortified city. More than a million tourists visit The Cittadella every year and its bastions have seen a number of marriage proposals as earnest couples seeing the beauty of Gozo from its historic high walls seize the moment with a ‘will you marry me?’

John Cremona, is an officer in charge at The Cittadella and says: “Notwithstanding all that the Cittadella stands for, namely the fear and insecurity of our islanders in bygone times during frequent pirate attacks, the Cittadella is actually a very romantic venue. When the morning hustle and bustle of the visiting tourists fades down, a special feeling descends on The Cittadella. Walking along the deserted streets or the ruins of former houses which will have seen many a love story unfold, gasping with wonder at the amazing vistas from the high bastion walls, whether admiring a sunrise or sunset in perfect stillness except for the occasional sound of bells – it is definitely a romantic location.”

In fact, the baroque Cathedral inside the Cittadella hosts wedding celebrations throughout the year and the venue often receive requests from couples wanting to marry on one of the bastions.

From bastions, now onto boats and Gozo’s shores because the crystal blue waters around Gozo’s coast often provide the perfect setting for marriage proposals both above and below sea level! There are a few dive schools in Gozo that have helped divers carry out underwater marriage proposals.

Like, Jovan Steffens from South Africa who travelled out to Gozo in September 2015 to propose to his girlfriend Indra, a nurse who was living in Gozo and was an enthusiastic diver. Jovan had never dived before and used his first ever dive to pop the question, with the help of Rob Smith, a (PADI Dive Instructor and underwater photographer) who took the couple out, settled Jovan under the water so he could focus on the all important big question – and then even took the photos!

If you like the romance of the sea, but prefer staying above water then Gozo has a number of sailing companies where you can book private boat trips. Frankie Magro runs Barbarossa Excursions, a sailing company offering sunset boat trips. Over the years, he’s witnessed many happy marriage proposals aboard his boat tours and says: “The coastline between Gozo and her sister island Comino is naturally romantic and a perfect setting for people to pop the question”.

“During our sunset tours we sail the couple around Comino’s shores, stopping for them to swim, snorkel and to explore their caves and because they are our only two passengers, it’s a very personal moment for them. We anchor in place to ensure a private experience. As the sun set it’s a unique experience to have a wedding proposal taking place in that setting.”

He continues: I know I’m biased because I’ve spent a lifetime sailing our coast but it is an unforgettable way to propose to your partner, everything is already there for you, with the soulful sunset and the silhouette of Gozo in the background. Often our crew will know if a tour has been booked for a marriage proposal because the boyfriend pre-orders a bouquet of flowers which we keep hidden out of sight until the perfect moment!

Jake Lines and Sophie Wilson from Shoeburyness in Essex,UK got engaged whilst staying out in Gozo in June 2017 in a proposal which reads like a romantic film script. They met while working in Gozo and it was on Sophie’s 30th birthday that Jake surprised his unsuspecting girlfriend with an impromptu Treasure Hunt culminating in a marriage proposal. She was expecting to go to the beach and relax but Jake had other plans.

He says – “Sophie and I met her parents for breakfast and were going to spend her birthday on the beach, I told her I was popping home to pack a beach bag but that’s the last she saw of me until I proposed at Comino much later on that day. After I’d left Sophie’s mum gave her a scroll which had clue number 1 of her Treasure Hunt, telling her to go to the place where we first met, which was Mellos Bar in Marsalforn, when she arrived the owner handed clue number 2 to her, telling her to go to where we’d spent our first date together – and so it went on occupying her day until she reached the final clue number 7”

Most of the 7 clues involved Sophie remembering key points from their relationship and Jake roped in locals to play their part. He’d also arranged for Sophie to have pampering treatments and bought her a dress which she wore to what she thought was the final location, a barbeque by their favourite beach, Ħondoq Bay. However, when she arrived a local took her by boat over to Comino where Jake was waiting in a remote candle-lit cave ready to pop the question. Not surprisingly, she said yes.

Jake says – “It was very emotional, I had champagne, candles and a jewellery box with a light inside so she could still see the ring even if it got dark. She started crying when she realised what was happening, whereas I thought she’d be upset with me for missing her 30th birthday!”

If you are considering a more low-key proposal, maybe in a romantic restaurant, Gozo has a fantastic selection of restaurants renowned for serving delicious cuisine in sensational settings. Whether it’s a shore lined eaterie at Xlendi Bay, Marsalforn or Mgarr where you can dine on freshly prepared Mediterranean cuisine whilst watching the sunset over the horizon; or high class fine-dining from a grand historic farmhouse letting you feast on our finest food whilst enjoying equally satisfying country views. Savour the taste of our sumptuous Gozitan food and delight in the romance of our island before getting down on one knee and asking that all-important big question to your beloved. Gozo can set the scene; you just have to find the words.